NASA has announced on 22nd February On NASA TV that seven earth-sized exoplanets are discovered which is 39 light years away from earth in the constellation Aquarius. The discovered star is called Trappist 1. Among the seven planets discovered three of them are in the habitable zone, these three planets are named as Trappist 1-E, Trappist 1-F, and Trappist 1-G. Because they are located outside our solar system they are called exoplanet. The discovery sets a new record as it is the most prominent discovery of the exoplanet in 100 years. Last discovered exoplanet which is in the habitable zone is Proxima Centauri which is 4 light years away from earth. So considering the distance the Trappist 1 system is the second closest habitable exoplanet to earth. 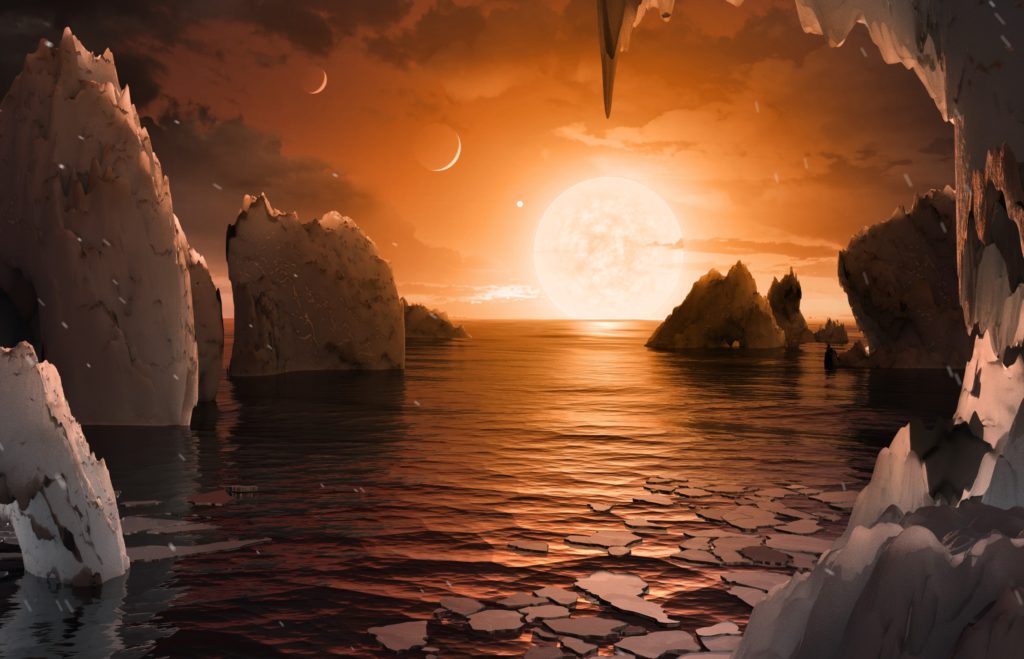 A possible illustration of the surface of Trappist 1-F. Image Credit-NASA/JPL-Caltech

Why Is This Discovery Exceptional?

NASA astronomers say that this is the first known system of seven earth sized planets around a single star. The star is 650 times cooler than our sun. But earth sized planets are much closer to it giving them similar heat as earth. Three planets that are in the habitable zone are warm enough to melt the ice into liquid water and cold enough to ensure that water does not get vapourised.

Astronomer Nikole Lewis says, “For me, it’s mind blowing. First time when I saw the system I was like you gotta be kidding me. It’s beyond what I could have ever dreamt of.” Astronomers also told that they don’t have enough utility to explore further. They will wait for The James Webb Telescope which is scheduled to launch in 2018.

Questions asked during the press conference

Q. How long will it take to reach there?

A. If we travel at speed of light it will take us 39 years to reach there and perhaps we can’t go there in our lifetime.

A. As of now, we have no utility to check whether there is any sign of water or not. So No.

Q. Is there any artificial signal received from those planets?

Q. How many such planets are discovered till now?

Telescope Spitzer, Hubble, and Kepler will help astronomers plan for follow-up studies using NASA’s upcoming James Webb Space Telescope. With much greater sensitivity, Webb will be able to detect the chemical fingerprints of water, methane, oxygen, ozone, and other components of a planet’s atmosphere. Webb also will analyze planets’ temperatures and surface pressures – key factors in assessing their habitability.

Thomas Zurbuchen, the astrophysicist said, ” Finding a new Earth now is not just a matter of if, but when”. The confidence of astronomers gives us a hint that we don’t have to look for another earth, all we need to do is explore the Trappist 1 system.